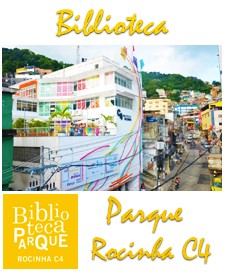 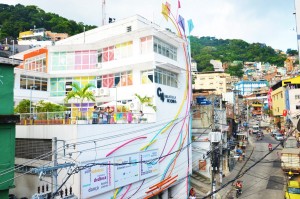 Opened in 2012 in an unprecedented initiative in the region, the Rocinha Park Library extends over five floors and has as its main spaces a DVDteca, where the public can watch movies in comfortable armchairs. There is also a library for children and a kitchen-school, with courses for the community, and an internet sector, with over 30 computers for public use.

Its library has a vast collection, with works of all genres and a structure of excellent quality. 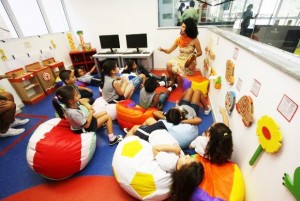 Adopted as a meeting point, learning, entertainment and coexistence by the region’s residents, the Parque Rocinha Library hosts a wide variety of courses, becoming a conduit for the residents themselves to be agents of culture promotion, not just receptors.

Its role goes beyond a common Library, as its role as a transformative organ of the Community is of immeasurable relevance, permanently offering various activities, including:

Soirée and readings, highlighting the “Letter of Slum Soirée”, where happens the visit of Poets, Writers, Musicians and special guests to a meeting dedicated to children. 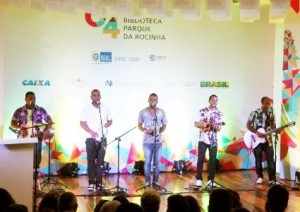 The permanent program also includes: “Book Exhibition”, Music and Literature, “Farm Songs” with lessons of musical instruments for the Library’s visitors. There are also Lectures and Debates with several important themes for social and human development, as well as meetings with Educators, Art Exhibitions, Arts and History Workshop. 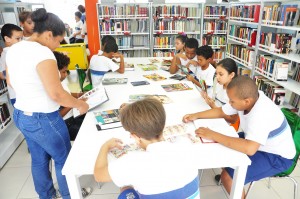 Students of the comunity in the library

In addition to other varieties ranging from scheduled views to a call center that aims to bring instruction to potential entrepreneurs of Rocinha town.

I point out that my visit to the Rocinha Library was one of the most rewarding I have ever done, because in my view it is a very unique Library that has an extremely important role for the community, going far beyond a common Library. I was still very well received and noticed among its team an engagement and dedication that conveys a very positive feeling about the role and dedication of the people who work in it. 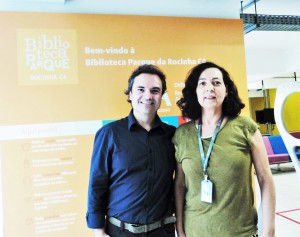 Writer Henry Jenné and Iracema Massaroni, one of the main people in the library.

I am very gratefull for the opportunity to meet them, especially Librarian Iracema Massaroni, who with all kindness introduced me to the Library and her Team.

My Faith has always made me believe in Angels, and I often say that there are angels on earth who act in the common good. Many of these are volunteers, devout doctors such as Doctors Without Borders, Educators, Nursery Servers, Orphanages and Nursing Homes, Missionaries, etc. 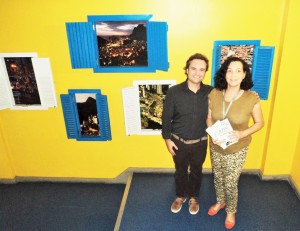 Surely, after this experience I will include a new group of special people who have a relevant role in society: Public Library staff.

Mainly because I have the belief that literature and art can transform a person’s life or bring it to a new level of awareness and enlightenment.

Below I leave some photos of the Rocinha Park Library, as well as some other information about the Community where the Library is located.. 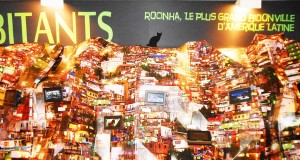 Rocinha is a community located in the southern zone of Rio de Janeiro, Brazil, and stands out for being officially the largest community in the country and in Latin America. However, it may be the largest in the world, according to some studies and research. Its estimated population is 150,000 inhabitants, making its region to be considered a neighborhood delimited by law (Law No. 1995 of 18/07/93).

Rocinha has peculiar characteristics as a great variety of commerce and services in its main road. The Parque da Rocinha Library is located at Estrada da Gávea, 454, Rocinha Town. Although it impresses anyone with the amount of people and movement on the place, its access is relatively safe, especially the main avenue “Estrada da Gávea”, which has constant policing and a large amount of commerce.

OTHER PICTURES OF THE ROCINHA PARK LIBRARY

(EMBRYO PROJECT THAT LEADED THE IMPLEMENTATION OF

Inspired by the successful experiences of the park libraries implemented in Medellín and Bogotá, Colombia, the Manguinhos Park Library was the first unit of the chain, inaugurated in 2010. With children’s library and Cineteatro, It is much more than a library: a space of cultural life, which offers the population wide accessibility. 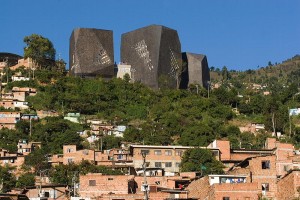 Embraced by the local community, the library also features a modern Theater Eduardo Coutinho, with 202 seats and 3D technology. The space also made possible the creation of initiatives such as the Manguinhos Scene Theater Company, contemplated by state and other local artistic groups.

Strongly integrated with the university vocation of the city of Niterói, which houses the Fluminense Federal University, the library has been expanding its partnerships with the academic community.