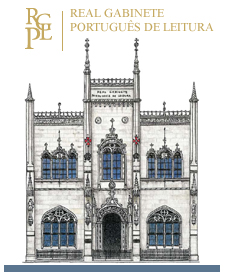 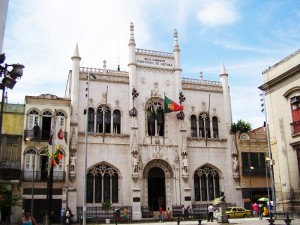 The Royal Portuguese Reading Office is a Private Library, founded in 1837 by José Marcellino da Rocha Cabral, and franchised to the public from 1900. It is the oldest Association created by the Portuguese of Brazil after the Independence of 1822.

Its headquarters, built in neo-Manueline style and which was inaugurated by Princess Isabel in 1887, holds about 350,000 volumes (thousands of rare works). It is considered the most valuable library of works by Portuguese authors outside Portugal.

The Royal Cabinet operates as a study and literary research center, managed and attended by university professors. Among the rare works of the Royal Cabinet is a copy of the princeps edition of “The Lusíadas” from 1572, which belonged to the Society of Jesus. It also has in its estate the autographed manuscript of “Love Perdition”, a work of the Portuguese writer Camilo Castelo Branco. In addition, there is also an important dictionary of Tupy Language from Gonçalves Dias. 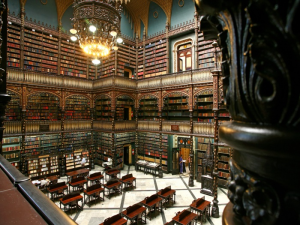 It was in his noble hall that the first solemn sessions of the Brazilian Academy of Letters were held, under the presidency of Machado de Assis. In its inauguration, the writer Ramalho Ortigão spoke: If one day Portugal were to disappear from the political letter of Europe, this House will still be as the monumental expression of the fulfillment of the prophecy: “neither the language nor the Portuguese name on earth will be over”.

In addition to its fabulous bibliographic collection, the Royal Reading Office has a very valuable collection of works of art in general, ranging from sculptures to paintings, as well as rare manuscripts of various kings and even Pope Pius X. On the facade, by the sculptor Simões Lopes, are the statues of Camões, Vasco da Gama, Pedro Álvares Cabral and the Infante D. Henrique. In the noble hall, 36 coats of arms of Portuguese cities of the age adorn the structure that delimits the ceiling walls.

Some say that the Royal Portuguese Cabinet is the true collection brought by Dom João when Napoleon’s troops invaded France and the headquarters of the Portuguese Crown was moved to Brazil. Such statement contradicts the Brazilian National Library which, according to its history, carries this statement. However, there is no way to prove one thing or another.

However, whether or not it is the part of the true Royal Collection, what matters is that it is a top-notch institution in every way. The Royal Portuguese Cabinet is wonderful, whether for its collection or for its architecture and works, which fill the eyes of all who enter inside.

Finally, it is noteworthy that in 2014 the Royal Portuguese Reading Office was elected one of the 20 Most Beautiful Libraries in the world by Time Magazine, along with the Trinity College Dublin Libraries and the Alexandria Library in Egypt. I am glad to say that it was one of the most beautiful Libraries I have ever visited, and I recommend everyone to visit to appreciate its beauty. It is open daily. Its is also posible to become a member of the Institution, being that the registrations can be made daily in its secretary, Street Luís de Camões No. 30, in downtown Rio de Janeiro.

NOTE: To the Portuguese Royal Reading Office, my sincere thanks for the adimition of two copies of my book “21 Days In the End of the World” (portuguese edition), which will be part of its collection. 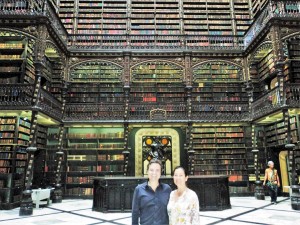 In the picture above, Me and Vera Lúcia, Librarian and one of the responsible by the Library of The Royal Portuguese Reading Office.