The Public Libraries Project is exclusively personal and has no ties to any public or private entity or company. This is a personal project by the author that aims only to contribute to Literature, in special young people of public schools and users of Public Libraries in general.

“Out of the world of books by my humble social origins, it was in the Public Library that I developed self-taught. The habit of going to libraries became ingrained in me from the age of 16. My favorite place, arguably, was the Galveias Municipal Library, in Campo Pequeno, inaugurated in 1931 and still active today.It was there that one day I found a bound book, which was to me like another sun that was born.”

You can watch the video above if you wish. 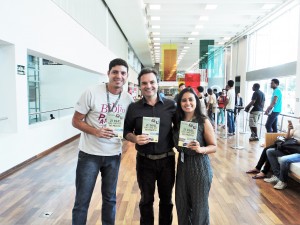 Francisco, Me and Suellen

The State Park Library of Rio de Janeiro is the result of extensive expansion and modernization work that has consumed four years and much work on civil works, collections, equipment and facilities. It is one of the most modern and sophisticated libraries I have known so far.

It was created to offer a collection of around 200,000 fiction and nonfiction books, art books, comics, children’s library and 20,000 films. At its current 15,000 m², the library also promotes unique experiences with workshops, laboratories, multimedia platforms and a diversity of artistic languages.

The State Park Library is accessible and has a specialized team to assist people with disabilities, for which there is a collection and special equipments. Its Education Program seeks to create a pleasurable relationship with reading, presenting the library as a space to be attended in daily life. 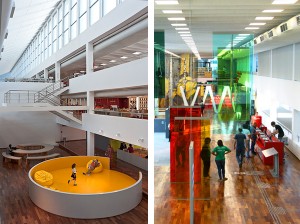 Inside of State Library of Rio de Janeiro.

It also has a Research and Training Center, with research, continuing education, vocational and complementary actions, as well as a virtual platform, inspired by digital games, approaching the aesthetics of young people with diverse content and expanding their cultural repertoire. 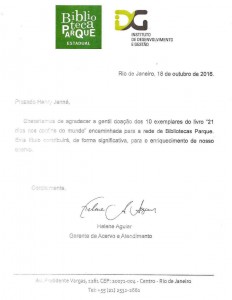 Letter of thanks from the São Paulo State Library.

I take the opportunity to thank the attention and affection received by the people who attended me in the downtown units (Francisco and Suellen) and the Rocinha unit (Iracema).

If you would like more information about the State Public Library of Rio de Janeiro, please visit the link: 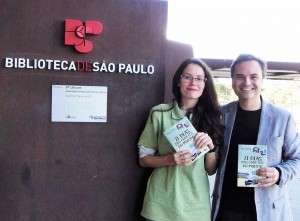 Me and Jackeline, from Sao Paulo State Library.

The São Paulo State Library is a public library located in the Parque da Juventude, in Santana neighborhood, North Zone of São Paulo city. It was reopened on January 8th, 2010, with an area of over 4,250 m2. The library has a series of permanent activities for all ages and tastes, such as: tale time, sensory games, playing and learning, among others. For the young crowd: reading club, luau BSP, ear reading, etc. For the adult audience and seniors alike, the library has literary construction programs, daily readings and monthly chats with guest writers, as well as monthly soirons with text, poetry and music presentations. 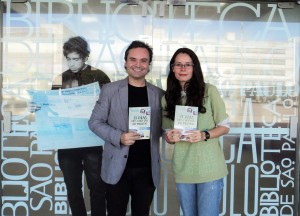 Me and Jackeline, from Sao Paulo State Library.

For those who live in Sao Paulo, or just visiting the city often, follow the library agenda and learn about the program.

It is very rich and varied, with various activities throughout the year. 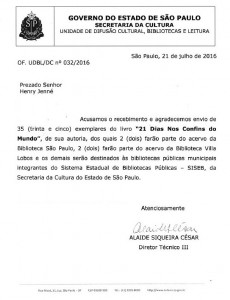 Letter of thanks from the São Paulo State Library.

If you wish more information about the São Paulo State Library, please visit the link: 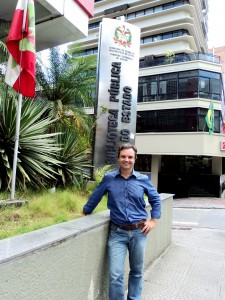 The Santa Catarina State Public Library was created in 1854, when the then president of the province, João José Coutinho, sanctioned the law No. 373 on May 31th, but only on January 9, 1855 it was officially inaugurated. Based on its creation date, it can be assumed to be one of the oldest libraries in Brazil. Operating in the current building since 1979, the library currently has a collection of titles from various fields of knowledge, in various media, as well as a collection of periodicals and one of rare works.

Its mission is to maintain, conserve and make available part of the state’s cultural memory to the population of Santa Catarina and promote the habit of reading. 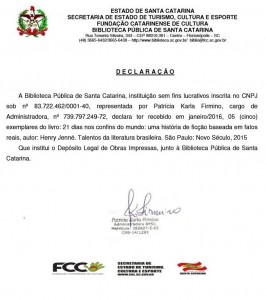 Since 1999 it works as a legal deposit through the law No. 11,074, of January 11th, which sanctions the obligation of Santa Catarina publishers and writers to register a copy of each printed work for their collection.

It is located in the central area of the Santa Catarina capital, at Tenente Silveira Street, 343. 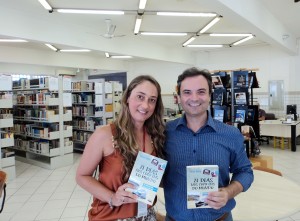 Me and Patricia Karla, from Santa Catarina State Library.

If you would like more information about the SC State Library, please visit the link: 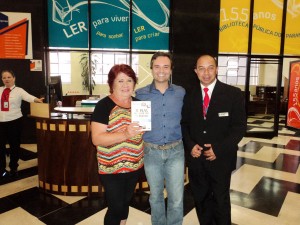 Mrs Eugênia, Me and Mr. Osni.

The Paraná Public Library is one of the largest public libraries in the country. Its collection brings together about 630,000 books, periodicals, photographs, maps, posters and multimedia materials. It is a subordinate body of the Secretary of State and Culture, occupying an area of over 8,500 square meters. It is one of the most frequented public libraries in the country, serving an average of 3,000 users per day. The services offered by the Paraná Public Library are based on equal access in all age groups with products appropriate to their needs.

Letter of thanks from Parana State Library.

The library was created by the vice President of the Province José Vaz de Carvalhares on March 7th, 1857 at Lyceu de Coritiba. At first the proposal was to form a small collection with works more convenient to Lyceu. However, it has become the living and active organism that promotes the meeting of the people with the universe of knowledge, adapting to changes and technological advances. But to reach this level of evolution, the library went a long way, facing difficulties, undergoing renovations and 12 headquarters until the new building was inaugurated on December 19th, 1954. The solemnity was honored by the then President of the Republic, João Café Filho , and the governor of the time, professor Bento Munhoz da Rocha Neto.

For more information about the Parana Public Library, visit the link: 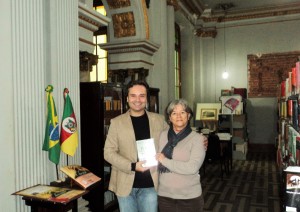 Mrs Ionice and me.

The history of the Rio Grande do Sul State Public Library begins in the province of São Pedro, during the reign of Dom Pedro II. On March 30th, 1871, Deputy João Pereira da Silva Borges Fortes Filho presented to the Provincial Assembly of Rio Grande do Sul a project for the creation of an official Library. The project was approved and transformed into law No. 724 of April 14th of the same year by the then President of the Province.

On January 21th, 1877, the RS State Library was installed and open to the public with 1,809 works and 3,566 volumes. Its director and main organizer at the time was Dr. Fausto de Freitas e Castro. This year it served 1,483 readers who consulted 691 works. 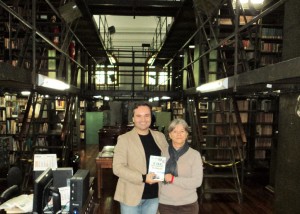 Me and Mrs. Ionice from the document filing and restoration department.

In 1915 the Library becomes autonomous and it was transferred to the building where it is located, at Riachuelo Street, downtown Porto Alegre City In 1986 the Library building was listed by the State Institute of Historical and Artistic Heritage, and in the year 2000 by the Institute of National Historical and Artistic Heritage. 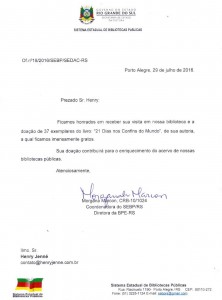 Letter of thanks from Rio Grande do Sul  State Library.

From the beginning of 1996, the computerization of the Library’s technical processing began and the multimedia sector was established, offering free access to the internet, e-mails, videos and CD-ROMs. The library also has a Braille Sector aimed at the visually impaired. The Moorish Lounge offers an artistic and cultural agenda from March to December, in partnership with the Association of Friends of the Public Library. Scheduling includes guided tours for individuals and groups. New projects under implementation aim at rescuing the original forms of the Library, recovering its collection and expanding opportunities for access to all public intended for the Library.

For more information about the Rio Grande do Sul State Public Library, visit the link: